Community means a lot to me. It started as a volunteer interest while running student organizations in college and organizing startup weekend events. Then it became my business while building the Unreal Collective accelerator. And now, since Unreal was acquired by Smart Passive Income, it’s my job!

The word “community” is used in so many contexts…what does community really mean?

Back in August, I wrote an article where I defined community as:

A group of people with commonality – shared interests, values, or beliefs.

But I want to dig deeper into the history of the word.

Community traces back to the late 14th century, with both French and Latin roots. “Community” was used to describe “a number of people associated together by the fact of residence in the same locality” as well as “the common people” (i.e. not rulers or the clergy).

The Old French “comunité” meant “commonness” or “everybody.”

Today, the most common definition is:

In more recent history, the word has grown from being defined as physical closeness into emotional closeness and shared identity with this second definition:

A feeling of fellowship with others, as a result of sharing common attitudes, interests, and goals.*

The feeling of community is really important – maybe more so now than ever before. But I think that feeling of fellowship is borne out of proximity (physical or digital) to others who share the same interests and values as us.

And those definitions break down into sub-descriptions that contribute even more meaning: 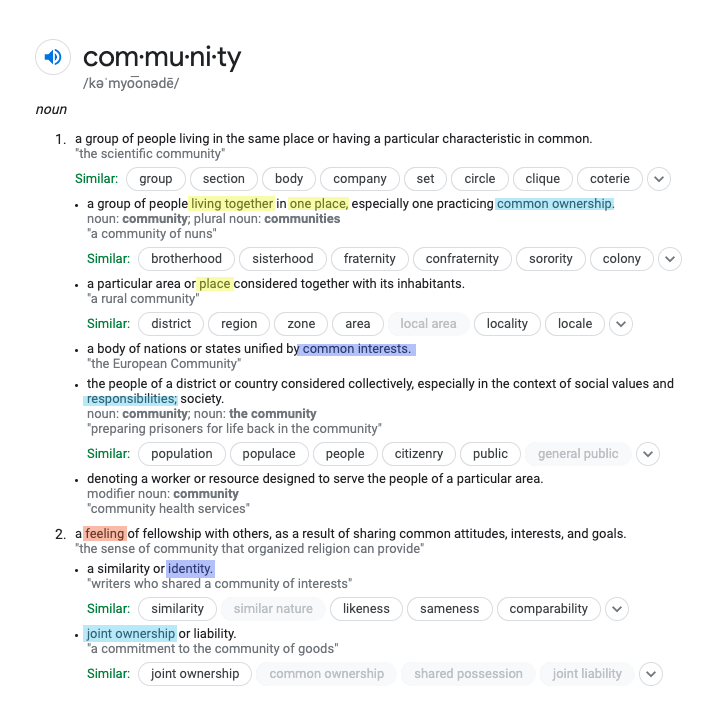 So for the purposes of my essays, I’m going to speak about community as:

A group of people with something in common

That may be interests, values, beliefs, or even an inherent physical trait.

Even physical proximity (i.e. living in the same place) is sharing something in common. And while this definition feels broad, it will serve us well when we talk about creating space for community.